You have allowed cookies to be placed on your computer. This decision can be reversed.

Written by Emma Burbidge Posted in Alcohol and drug addiction 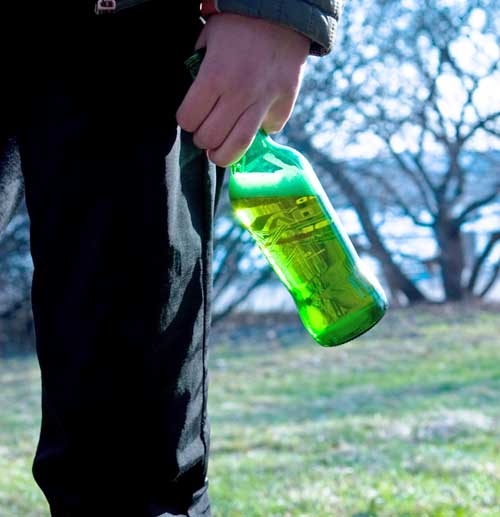 Although the legal age to purchase alcohol is 18, statistics show that few young people wait that long to start drinking. By the age of 15, 80 per cent have already tried alcohol, so perhaps you have started drinking too.

If this is the case, then I think I should tell you about the serious effects drinking can have on your health. It’s fine to go to the pub, the park or a mate’s house to drink some beer; you just should be aware of how much you are drinking! I don’t want you to be one of the 10,000 young people hospitalised every year as a result of drinking too much.

The UK has a definite binge drinking culture, with one of the highest rates of binge drinking in Europe. Binge drinking is when you drink more than double your recommended amount of alcohol in one session. Even though this might not seem harmful, it can cause serious problems in later life and occasional binging can lead to an addiction if you are not careful.

Drinking too much can cause disturbed sleep, feelings of stress, memory loss, shaking and sweating, anxiety, headaches and stomach aches, and sickness. It can lead to accidents – drink driving for example, which is extremely dangerous. It can also lead to unprotected sex, which as well as feelings of regret, could have serious implications, such as the risk of sexually transmitted disease and unwanted pregnancy for girls. When you’re drunk you might feel like a million bucks, but in reality it’s probably quite the opposite and you could make a serious fool out of yourself and get into dangerous situations.

I don’t want to scare you, but it’s worth considering what’s at stake. Alcohol can cause you to gain weight, which can make you feel depressed. Beer, for example, is very fattening and reduces the amount of fat your body burns for energy. That’s why you always want to buy a take away or cheesy chips after a few at the pub.

Of course this does not mean you shouldn’t have fun, just try to limit how much you drink and drink responsibly under the supervision of adults. We all drink at different rates and tolerate different amounts, so if you’re beginning to feel ‘a little tipsy’, it’s best to stop drinking and switch to water, or leave the party altogether. I know this is difficult when you come under pressure from others, but you’ll feel better about it in the morning.

You can talk to our TCHC advisers if you think your drinking habits are getting too much, especially if you are having blackouts and struggle to remember what happened the night before, you are drinking in the middle of the day on a daily basis or if it’s affecting your relationships. Talking to someone can really help you put a plan for quitting into action, and can build you a support network when everything gets too much.

There are also a number of charities offering help and support, such as Talk to Frank or Mentor.

Emma Burbidge is the marketing assistant at TCHC. She helps to manage the website and promote the Youth Contract. She enjoys writing for the blog and sharing advice and tips with young people on a range of topics, from finding a job to battling with depression.

This email address is being protected from spambots. You need JavaScript enabled to view it. | http://www.tchc.net

Find us on Vine